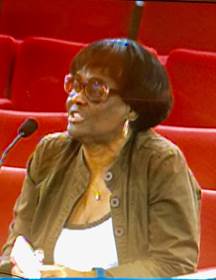 The Board of County Commissioners adopted a resolution that will add Sunday service to the Cutler Bay Local (Route 200). The Cutler Bay Local is the Town’s trolley service, operated by Miami-Dade Transit, which serves as a critical connection for many Transit dependent elderly residents in Cutler Bay.  The new service day will bring the Cutler Bay Local to a full 7-day-per-week service.“I am greatly relieved to finally have access restored for our many older and Transit dependent residents,” said Commissioner Levine Cava.  “With the teamwork we had in Cutler Bay, we were able to find a solution that actually provides even better service for our residents.”

Additionally, the resolution creates a new circulator route – Route 248 - running from Naranja, through Princeton, Goulds, and Cutler Bay to the Transitway.  This new route will provide “last-mile” connections for tens of thousands of residents who, until now, had no bus service connection at all.  The establishment of this new service has been a long-standing issue for Commissioner Levine Cava. “I had dubbed this area, with the many thousands of homes that had been built over the last 15 years, as the South Dade ‘Transit desert’ where there was absolutely no reasonable access to Transit even though the area is really close to the Transitway,” explained Commissioner Cava. “Now our residents will finally have an opportunity to leave their cars behind and get to jobs, shopping and more.”

Finally, the County made modifications to Route 35 which serves communities of deep South Dade all the way to Miami-Dade College Kendall Campus.  The route had been recently consolidated with Route 70 over the objections of many area residents and Commissioner Levine Cava.  The resolution adopted by the Board made significant modifications to restore areas that had been cut off from transit service after the consolidation.

Maps depicting the service adjustments are depicted in the resolution: