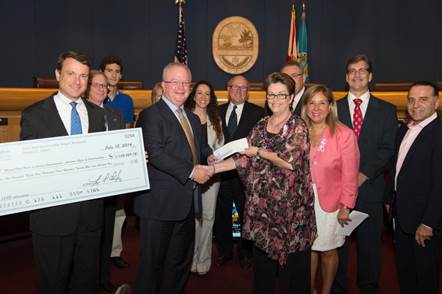 The system serves 12 major facilities, including County Hall, several courthouses, the Network Access Point of the Americas, and the American Airlines Arena. Associated system improvements were specifically engineered to qualify for the federal tax incentives while additionally benefiting Miami-Dade County by being self-funded over a 15 year period through energy cost reduction.

In addition to the cash rebate realized through the work of the County’s Office of Sustainability, the increased energy efficiency of the chilled water system resulted in a 585,000 kilowatt hour (kWh) annual electric savings and a reduction in greenhouse gas emissions by 327 metric tons per year in support of GreenPrint, the County Sustainability Plan.  The improved efficiency of the system allowed the system to serve additional county facilities in the area while saving energy. System expansions were partially funded by the County’s Energy Performance Contracting Program, managed by the County’s Internal Services Department, through its Facilities and Utilities Management Division.

The County engaged Efficiency Energy LLC in 2012, to establish and administer its 179D allocation process and secure unclaimed resources as a new and unanticipated source for savings. The 179D tax benefit was established through the 2005 Energy Policy Act, which created a tax deduction of up to $1.80 a square-foot from qualifying building retrofits and new construction projects.  Since government entities do not pay taxes, under the 179D Special Rule for Government-Owned Buildings, they may allocate the benefit to a tax-paying ‘Designer’ and receive savings in return for the allocation. In this case, ConEdison Solutions served as the County’s partner in achieving this tax benefit through implementation of an energy performance contract.

Energy efficiency has been termed “the fifth fuel”. It also happens to be one of most cost-effective ‘fuels’.  It costs less to save kilowatt hours through efficiency measures than it would otherwise cost to construct additional capacity and to generate that same amount energy.

“Under my leadership, our County is focusing on finding efficiencies and saving money, so I am very pleased by the initiative shown by the Office of Sustainability,  Regulatory and Economic Resources Department, our Internal Services Department and our private sector partners to help bring savings to our County and our community,” said Miami-Dade County Mayor Carlos A. Gimenez.

“In terms of both energy efficiency and cost efficiency, Miami-Dade County stands as a model for local government across the United States,” said Michael Gibson, Vice President, Energy Services at ConEdison Solutions. “Today more than ever, taxpayers look to their public officials to deliver sustainability in a way that makes economic sense.  Other communities can learn a great deal from the creative energy performance contract strategy Miami-Dade adopted to meet its chilled water system challenges.”

Efficiency Energy, LLC is a Denver, CO and Washington, DC based tax-consultancy who has worked with state, local, and federal agencies to implement 179D allocation programs and to manage and realize savings from qualifying projects.