Jiana helps instructors demonstrate golf to children with physical disabilities and autism through The First Tee, a group that strives to impact the lives of young people by providing educational programs that build character, instill life-enhancing values, and promote healthy choices through the game of golf. She instills The First Tee nine core values – confidence, honesty, responsibility, respect, perseverance, courtesy, integrity, sportsmanship, and judgment – into her everyday life and mentors others on what she has learned.

Jiana is  also the Treasurer of Student Government and the Vice President of Teens for Fitness at her school.

Jiana has reached the Eagle level, the highest level, in The First Tee Program and has accumulated over 1500 community service hours since she began with the group in 2009.

Belen lost her father to cancer earlier this year and, despite her extraordinary loss, she never made excuses at school, taking all her exams and turning in all of her assignments. As a result, she has become a leader in her family, taking care of her younger brother and sister by helping them with homework after school. Her brother is one of seven people in the United States to have a type of albinism that affects his eyes, and his condition has taught her extraordinary patience and kindness.

Each summer, Belen serves as a counselor with Shake-a-Leg, an organization that is passionate about getting people with all ranges of abilities out on the water. She serves on her school’s Key Club and Helping Hands Club. She also plays golf competitively at her school, and enjoys that the game is both mentally and physically challenging.

Belen hopes to attend Georgia Teach in the fall to study engineering.

Santiago can speak and write four languages- English, Spanish, French, and Portuguese and can also communicate in Creole. He is currently learning Mandarin Chinese and was recently awarded a full scholarship to study the language in China for one month in the summer.

Santiago is the Assistant Concertmaster for the Greater Miami Youth Symphony, through which he is the lead of his first violin section. He has also participated in Florida’s All State orchestra group, consisting of the best musicians by grade level in the state of Florida, for several years. He also currently interns at an immigration law firm, where he has become well-versed in consular procedures, green card admission, deportation waivers, investment programs, and citizenship procedures. He is awaiting responses from the Colombian Consulates in Sao Paolo and Paris , as he hopes to intern in one of the two cities when he returns from China.

As a result of studying in downtown Miami, Santiago became more aware of the homeless population in the area and was inspired to contact a TED talk professional to help him establish a gardening project which would provide community vegetable gardens in an effort to improve the overall health of the community and provide food for those who are impoverished.

Santiago plans to run for President of his school’s Student Government association in order to build bridges of understanding and compassion for all his peers. He aspires to attend a top three university and later attend Harvard Medical School to pursue a career as a neurosurgeon. 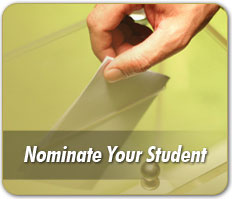 Help recognize students who strive to improve themselves and achieve more.