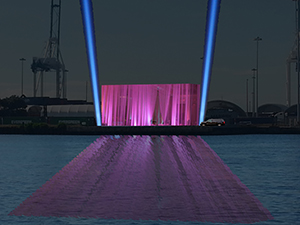 (MIAMI, November 4, 2013) – Miami artists Jim Drain and Bhakti Baxter will create M|/\M|M/\X, a four-night temporary public art installation that will serve as the backdrop to the most elite, VIP party of Art Basel Miami Beach. A decadent soiree hosted by the artists will take place in the cargo containers located on the waterfront area of PortMiami. This party promises to be the most exclusive of Art Basel Miami Beach, only available to be experienced voyeuristically by travelers in vehicles on the MacArthur Causeway or on boats in Government Cut. The artists note, “Everyone is invited, no one may attend.”

M|/\M|M/\X will open December 4-7, 2013 from 7-10 PM daily. Additional information on the event can be found at www.miamidadepublicart.org

This work was commissioned by Miami-Dade County Art in Public Places to celebrate the completion of two public art projects at PortMiami, Jim Drain’s The Bollard Project, a monumental installation of 1,000 artist-designed traffic control bollards, and Bhakti Baxter’s Coral Reef City, a series of 18 toll booths wrapped in photographs of an undescribed species of zoanthids discovered by the scientific art endeavor Coral Morphologic.

Bhakti Baxter was born in Miami Florida in 1979 where he currently lives and works. Baxter received his BFA from the New World School of the Arts College in Miami and his work has been featured in several group and solo exhibitions in Miami and around the world. Solo exhibitions include the Museum of Contemporary Art in North Miami in 2002, the Emmanuel Perrotin Gallery in Paris, France in 2005, Bravin Lee Programs in Manhattan, New York in 2009, Fredric Snitzer gallery in 2007, Federica Schiavo Gallery, Rome in 2010, and Gallery Diet, Miami, 2011. Working in a variety of media including collage, sculpture and drawing, Baxter’s goal is to disorient and disrupt accepted boundaries as he questions common perceptions of the mundane. Investigating the territory amid science and spirituality, his practice aims to bridge a medial relationship between the seemingly ordinary and the interpretive freedom of abstraction. Baxter’s art is in constant dialogue with natural systems, exploring how the mind interacts with matter while acknowledging the importance of exercising intuition to locate explanations. Bhakti Baxter is currently represented by Gallery Diet, Miami, FL.

Jim Drain was born in Cleveland, Ohio (1975) and is currently based in Miami, Florida. Drain has exhibited extensively throughout the United States and Europe; he was awarded the Baloise Prize for his Statements exhibition at Art Basel in 2005, he completed a DAAD residency in Berlin in 2008 and will soon complete a site-specific commission for a new U.S. Embassy compound in Rabat, Morocco. His work is held in the collection of the Museum of Modern Art, New York, among others.