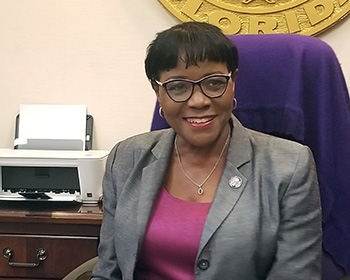 Known as a Commissioner who gets things done, Audrey M. Edmonson has represented District 3 since December 2005 and was unanimously elected by her colleagues to serve a two-year term as Chairwoman for 2019-20. She previously served as Vice Chairwoman from 2016 to 2018 and from 2010 to 2012. Prior to joining the Commission, she served as Mayor of the Village of El Portal.

As a Commissioner, Edmonson has proudly represented the communities of Liberty City, Little Haiti, Overtown, the Upper East Side, Edgewater, Buena Vista, Allapattah, Wynwood, San Marco Island and Watson Island, along with Brownsville, Biscayne Shores Park, the Village of El Portal and the Village of Miami Shores.

Since her arrival on the Miami-Dade County Board of County Commissioners, Chairwoman Edmonson has successfully championed a wide range of issues to improve residents' quality of life, including taking on such issues as gun violence, affordable and workforce housing, pool safety, crane safety, combating the scrap metal and copper wire theft epidemic, addressing disparities in County contracting and small business programs, promoting local hiring, securing an $830 million bond for the Jackson Health Care System, expediting the procurement process, and obtaining funding to renovate the Historic Hampton House Motel.

Born and raised in Liberty City, Edmonson received a bachelor's degree in Psychology from Florida International University and a dual master's degree in Marriage and Family Therapy and Mental Health Counseling from Barry University. She became active in local politics by first serving as Mayor of the Village of El Portal in 1999, was re-elected three successive terms and became the municipality’s first mayor to be elected by residents rather than by the members of the Village Council. Under her leadership, the Village hired its first Village Manager.

Edmonson was appointed to the Miami-Dade County HIV/AIDS "Getting to Zero" Task Force and served as Chairwoman of the Florida Department of Transportation (FDOT) I-395 Signature Bridge-Aesthetic Steering Committee. She also serves on the Miami-Dade Economic Advocacy Trust and the Public Health Trust nominating councils, the Jackson Health System General Obligation Bond Citizens' Advisory Committee and the County Advisory Task Force for the Byrne Criminal Justice Innovation Program Planning and Implementation Project which is referred locally as Project PEACE: People Engaged and Advocating for Community Empowerment. Chairwoman Edmonson serves as the Chair of the International Trade Consortium.

Chairwoman Edmonson championed the establishment and is an Ex-Officio Member of the Miami Children's Initiative (MCI), a program modeled after the Harlem Children's Zone, aimed at helping Liberty City children from cradle to adulthood. Joined by local pastors and community activists, Chairwoman Edmonson leads "Operation Restoration," an anti-crime strategy group. She also serves as a member of the Lindsey Hopkins Educational Excellence School Advisory Council. In 2007, as Miami-Dade County's representative for the Miami-Dade County Sister Cities Program, Chairwoman Edmonson signed an agreement with the City of Cape Town, South Africa and the City of Dakar, Senegal establishing Sister City ties and thus fostering trade and cultural exchanges.