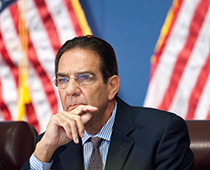 A genuine "idea man," Xavier L. Suarez was elected to serve on the Miami-Dade County Commission as District 7 Commissioner on May 24, 2011, representing numerous municipalities including the City of Miami, the Village of Key Biscayne, Coral Gables, South Miami, and Pinecrest.

Suarez served as Mayor of the City of Miami beginning in 1985 and was subsequently reelected in 1987 and 1989. During his tenure, he worked diligently towards the construction of affordable housing, prioritized community neighborhood improvements and received national praise for his effective handling of civil disturbances.

Suarez joined the Miami-Dade County Commission in 2011 and has focused on the issues of affordable housing and job creation by fostering a positive and supportive environment for current and future entrepreneurs and workers in various high-demand trades. Understanding that the children are our future, Commissioner Suarez also has spearheaded a number of innovative youth programs such as the Miami-Dade Youth Pre-Apprenticeship Career and Technical Training program, the Youth Summer Jobs Program, and the Envelopes of Safety afterschool program offering free STEAM activities to District 7 students.

Suarez also is the author of six books. The first, A Unified Theory of God: Mind and Matter, was published in 2005 by AuthorHouse. He is married to Rita Suarez and is the father of four children: Miami Mayor Francis Xavier, Olga Marie, Anna Teresita, and Carolina.