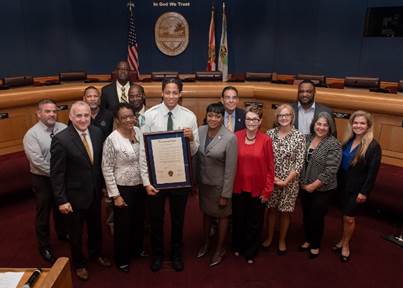 “This is proof that our County employees are delivering excellence every day, and it’s not just a paycheck.” Commissioner Jordan said. “We’re here to serve the community.”

Saleem was on duty driving northbound on Northwest 155th Street and 27th Avenue when he saw a car plunge into a canal. He then stopped and secured the bus and got into the water. The baby’s father had managed to pull out his son out from the sinking car. He threw the baby to Saleem and asked him to please save his baby. Saleem grabbed the baby in one arm and with the other assisted the father and his female companion, both in their 20s, in getting out of the car, which continued to sink.

Saleem’s quick and brave action ensured everyone survived the accident.  Following the rescue, a survivor’s aunt hugged him for 10 minutes.

“We were just all happy that it ended the way it did,” he said.

Asked if he considers himself a hero, Saleem, who has been driving buses for eight years, said: “I just did what I had to do. My heart and my instinct took over.”

“He said anybody would’ve done what he did, but ask yourself, would you do it? Add the fact that his childhood friend drowned in a canal at age 15 and the same could have happened to him. But he didn’t hesitate, and he put others’ safety before his own,” Commissioner Bovo said.