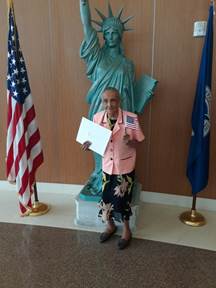 MIAMI-DADE COUNTY – Miami-Dade County Commissioner Jean Monestime wants to extend a heartfelt congratulations to North Miami centenarian Andrea Joseph, who at the age of 103 has become a U.S. citizen today!

Ms. Joseph was born on August 15, 1915 in Jacmel, Haiti. She entered the U.S. as a permanent resident about 15 years ago, and today, just a couple months shy of her 104 birthday, has become a naturalized U.S. citizen. Her family and friends are proud of this milestone in her life, as is Commissioner Monestime.

Miami-Dade County is a true embodiment of the term “cultural melting pot,” with its blend of Caribbean and other cultures, which is why Commissioner Monestime wants to celebrate and highlight Ms. Joseph becoming a U.S. citizen at the age of 103!