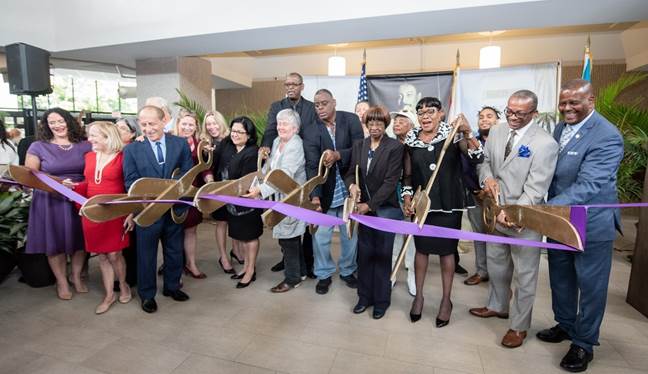 Chairwoman Edmonson, third from right, joined by other officials and Caleb family members, cuts the ribbon at the newly renovated Joseph Caleb Center.

MIAMI-DADE – Miami-Dade County Commission Chairwoman Audrey M. Edmonson, along with Mayor Carlos Gimenez and other officials, hosted the grand reopening ceremony of the Joseph Caleb Center on May 8 to celebrate the completion of the $30 million renovation project, which provided much-needed improvements to the neighborhood center located at 5400 NW 22nd Ave.

Hundreds of residents, including members of the Caleb family and local elected officials, turned out for the official ribbon cutting of the newly refurbished facility, which originally opened in 1977 and houses a number of County department offices and courtrooms, as well as Chairwoman Edmonson’s district office. Renovations and improvements include all-new energy-efficient roofs and lighting, a new garage facility with increased capacity for public parking, two renovated courtrooms and a hearing room for County civil, criminal and traffic hearings, and new offices for clerk of courts and state attorney services including the processing of civil claims, misdemeanor and felony fine payments, traffic and parking violations payments, and marriage licenses and ceremonies.

During the ceremony, Chairwoman Edmonson presented a plaque to the family of Joseph Caleb, the 1960s Miami labor leader for whom the center was named. The event also featured the unveiling of the newly restored bust of Gwendolyn ‘Gwen’ Sawyer Cherry, the first African-American woman to serve as a state legislator in Florida. The bust will remain on permanent display in the center’s new atrium. 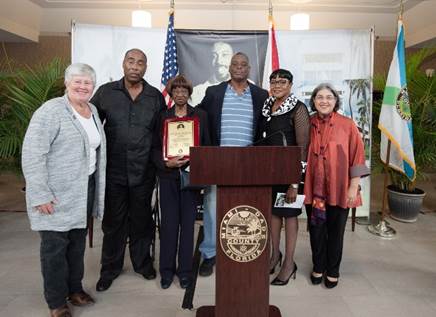 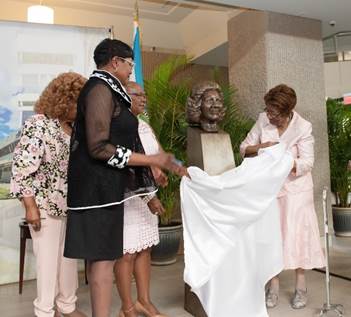