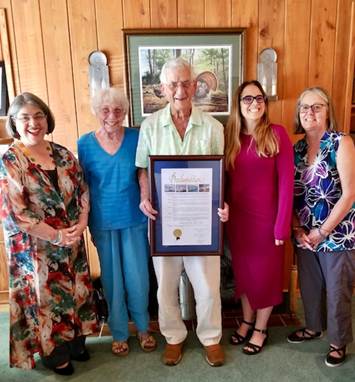 MIAMI-DADE – Miami-Dade County Commissioner Daniella Levine Cava presented a proclamation to Homestead couple Don and Joyce Gann, in recognition of their many years of service and dedication to the protection and preservation of native plants and natural areas. The Miami-Dade County proclamation designated February 11, 2019, as Don and Joyce Gann Day.

“I am humbled and honored to recognize such an extraordinary couple that tills the soil, our souls and shares their love for native plants in a way that has transformed our county,” said Commissioner Levine Cava when presenting the Ganns with the proclamation at their daughter’s home on Feb. 8. “I’m delighted that we could honor Don and Joyce Gann with their own special day.”

Don and Joyce Gann are natives of Miami-Dade County and were tomato farmers for over 35 years. During that time, they learned to appreciate the diverse natural habitats that surrounded them in Homestead and Everglades National Park. Joyce’s love for native plants developed in the 1940s, while a Girl Scout, learning about native plants while planting a native arboretum in Homestead.

In 1950, Don and Joyce, who were high school sweethearts, were married.  In 1973, Joyce became a Miami-Dade County Park naturalist at the new nature center that was just opened in Castellow Hammock Park. In 1975, they opened Gann's Native Tropical Greenery, where they grew native plants that could be used for landscaping as well as restoration.

The Ganns’ interest in native plants gave rise to the Florida native plant society in 1982 and were key to the formation of the Dade Chapter of the Native Plant Society. Soon, Joyce was the president of the local group, helped promote other chapters around the state and was active in the Florida Native Nurseries Association. Joyce was also on the South Florida Water Management District committee which drafted the model landscape code for the tri-county area and was active in other landscape and agricultural committees. One of her proudest accomplishment was to help compile and coordinate native plant information into Miami-Dade County’s last two landscape manuals as well as the implementation of the 30 percent native plant minimum requirement for new homeowner landscaping.

During this time, Don was busy working with county staff to propose lands to be purchased for the Florida Conservation and Recreation Lands Committee (CARL).  In 1993, Don was one of the first members to serve on the new Miami-Dade County Environmentally Endangered Land’s Program Land Acquisition Selection Committee (LASC).   He feels that one of the challenges of the future will be how the public can use and enjoy these native preserves without destroying them. Don recently had to resign from this board in the fall of 2018 due to both his and Joyce’s declining health, but their legacy is the protection, purchase, retention, and maintenance, restoration and education of natural areas and native plants in Miami-Dade County.