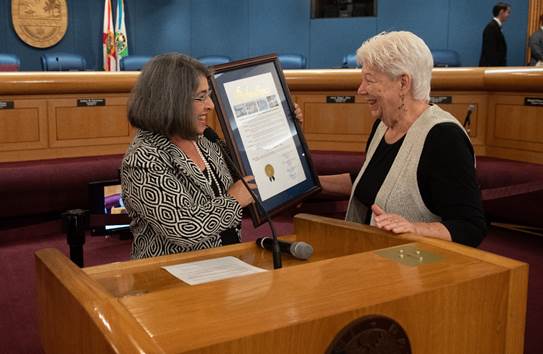 MIAMI-DADE – The Miami-Dade Board of County Commissioners on June 4 honored Julia Dawson for her decades of social justice advocacy, leadership and volunteer efforts in Miami-Dade County and throughout Florida. Dawson recently retired and soon plans to relocate to Virginia.

Dawson has served on the Board of Directors of the Dade County Chapter of the Florida Association for Women Lawyers and the Board of SAVE Dade, which led the fight to successfully pass Miami-Dade County’s Human Rights Ordinance and then defeat repeal efforts. She was appointed to the Miami-Dade County Independent Review Panel which provided civilian oversight of the Miami-Dade Police Department, served as a board member of the American Civil Liberties Union of Greater Miami, and founded the Miami Clinic Access project in 1994.

“Julia has left an indelible mark on the social justice community in Miami-Dade and we will miss her tremendously,” said Commissioner Levine Cava. “In her honor, we will continue the good fight for equity and justice for all.”

Julia Dawson was born and raised in Miami. In the early 1970’s she became active in the feminist movement, primarily with the National Organization for Women (NOW).  She served as president of three Florida NOW chapters, Florida Legislative Director and lobbyist, and a member of the NOW national board. Under her leadership as president, the South Brevard Chapter established the South Brevard Women’s Center in 1975, which is still open today serving the needs of women in that area.

Dawson entered Antioch School of Law in Washington, DC at age 35 and after graduating in 1979 moved back to Miami where she lives today.