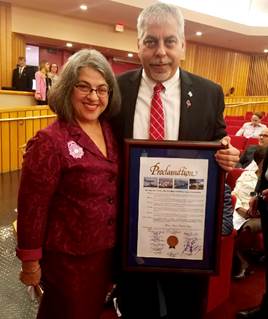 MIAMI-DADE – The Miami-Dade Board of County Commissioners today honored Consul General of Israel Lior Haiat for his years of service and contributions to Miami-Dade County. Consul General Haiat will be relocating back to Israel to assume the role as Spokesperson to the Ministry of Foreign Affairs in November.

Haiat assumed the post of Consul General to Florida, Alabama, Mississippi and Puerto Rico in February 2016. He came to Miami with a wealth of experience in Hispanic, cultural and media affairs.

Prior to his arrival in Miami, he served as the Department Director of Mexico, Central America and the Caribbean Islands at the Israel Ministry of Foreign Affairs in Jerusalem for two years. From 2009-2013, Mr. Haiat served as the Spokesperson and Public Diplomacy Officer at the Embassy of Israel to Spain.

The special recognition was sponsored by Miami-Dade County Commissioner Daniella Levine Cava who stated, “It has truly been a pleasure working with Consul General Haiat over the years to nurture and protect the special relationship our community has with Israel. This special recognition is particularly timely this week as we celebrated the Jewish High Holy Days of Rosh Hashanah, a time that we reflect on our past and spiritually prepare for the next year.”

The Board honored and reaffirmed the County’s commitment and friendship with the State of Israel. Deputy Consul General, Mrs. Kasa Harbor was also in attendance and recognized by the Board.