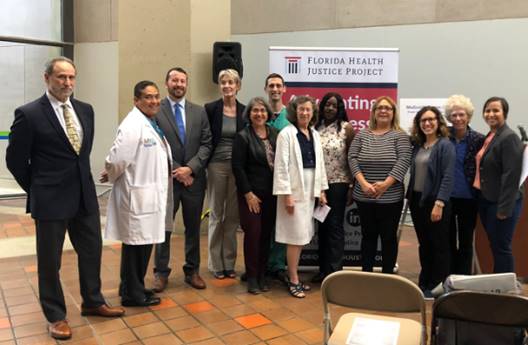 People in the coverage gap, including working parents, have income below the federal poverty level but their wages are considered too high in Florida to be eligible for Medicaid healthcare benefits. The coalition pointed to new research highlighted by the Center on Budget and Policy Priorities showing that nearly 2,800 older Floridians died prematurely because the state has not expanded its Medicaid program to adults with low income.

“I have repeatedly voiced my strong support for Medicaid expansion in Florida because it is the right thing to do,” said Commissioner Levine Cava. “Too many families across Miami-Dade are struggling to make ends meet and are forgoing critical healthcare because they simply cannot afford it. This is a medical issue, a moral issue, and an economic issue. We need Medicaid expansion in Florida now!”

“Sick in Paradise,” a new project of the Coalition, features stories from residents across the Sunshine State who are unable to get or keep healthcare coverage. Allison Holm, a part-time cashier from Miami Gardens who takes care of her 19-year-old developmentally disabled son, shared her personal story and struggles in accessing much needed healthcare. “I think it’s really unfair. I need to take medication for my blood pressure and depression, but I lost my Medicaid insurance when my youngest child turned 18. I feel the Florida Legislature doesn’t care because they have health insurance.” If Florida were to expand Medicaid eligibility, Allison would have the coverage she needs and the ability to take care of herself and her son.

“Over 400,000 low-income Floridians have no pathway to affordable health coverage because our state has not expanded Medicaid under the Affordable Care Act,” said Miriam Harmatz, executive director of Florida Health Justice Project. “Our leaders should consider how many more Floridians will suffer or die unnecessarily, and how many more billions of our tax dollars Florida will forego without expanding Medicaid.”

Nearly one in five adults (ages19 to 64) in Florida are uninsured. It is estimated that Medicaid expansion would generate about $4.6 billion in new mostly federal revenue to providers taking care of low-income residents without compensation in Miami-Dade County.