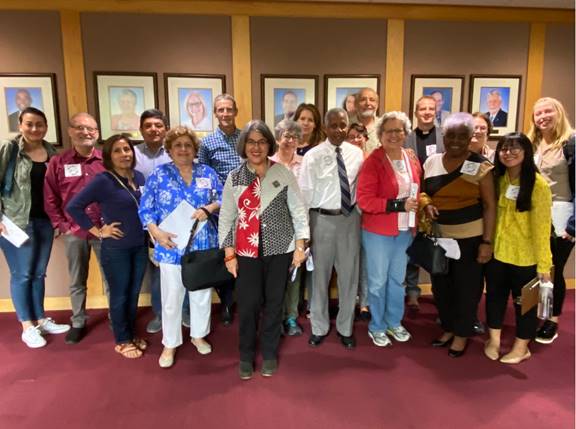 Clery and congregation members of People Acting for Community Together (PACT) joined Commissioner Levine Cava in support of a community ID program.

MIAMI-DADE – The Miami-Dade Board of County Commissioners today (Feb. 19) deferred a proposal to introduce a community identification program in Miami-Dade County.

The community ID program was developed in close collaboration with grassroots groups like PACT Miami (People Acting for Community Together), which conducted hundreds of listening sessions over the last two years with residents who expressed the need for a local ID. The program aims to help thousands of residents who struggle with basic day-to-day activities, like receiving medical care or picking up kids from school, without an ID – including seniors, people experiencing homelessness, foreign nationals, and people who don’t drive.

“This is about equity and fairness for all our residents and I’m disappointed by today’s deferral,” said Commissioner Levine Cava. “Questions were raised that had been answered by the previous report, and it was incorrectly stated that police had been excluded from discussions. Nothing could be further from the truth. We have worked closely with all relevant county departments to incorporate their feedback and concerns. With this program we could make a meaningful difference in the lives of so many families – instead, they will continue to lack access to basic services.”

The legislation follows the lead of other South Florida municipalities like West Palm Beach and cities around the country that have adopted similar programs. To protect residents’ privacy and information, the program would be administered by a third-party community organization.

“I have heard countless stories from people who need a local ID for the most basic daily interactions in life and work,” said Reverend Aaron Lauer of Coral Gables Congregational United Church of Christ, a member of PACT. “Whether it’s getting prescriptions filled, a visit to the dentist, or reporting crime to police, a form of local ID means these people belong in Miami-Dade and call our county home. A community ID would help them build a better life for themselves and their families.”