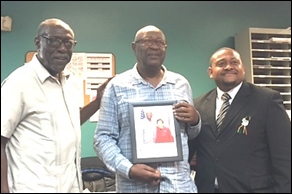 MIAMI-DADE – Members of the South Dade Democratic Black Caucus, Ron Brown Chapter, recently installed their newly elected Executive Board for 2019 to 2021. The ceremony took place at the Gibson-Bethel Community Center in South Miami. Following a rousing rendition of “Lift Every Voice and Sing” to open the installation ceremony, five members of the caucus took the oath of office and began their work. Members are charged with a mission to respond to the unique issues and concerns of South Dade residents and support its continued growth and diversity.

“I give honor to those who were elected with me,” said Min. Kevin Chambliss, newly elected President of the Executive Board. “We are truly a family and work together to make sure that our best years are in front of us.” Chambliss replaces Immediate Past Chapter President Chester Fair. Chambliss, who once served as Community Liaison for Miami-Dade County Commissioner Dennis C. Moss, is currently a Joint Community Outreach Representative to U.S. Congresswoman Donna Shalala and U.S. Representative Debbie Mucarsel-Powell.

“Congratulations to Min. Chambliss for his recent election as President to this important post,” said Commissioner Moss. “While a lot of people talk about progress and change, Chambliss is out there doing the work.”

The South Dade Democratic Black Caucus, Ron Brown Chapter, is an affiliate of the Democratic Black Caucus of Florida. One of its objectives is to support and solicit support for legislation and governmental action at the national, state, county and local levels which will reflect the best interest of the people in their respective areas.