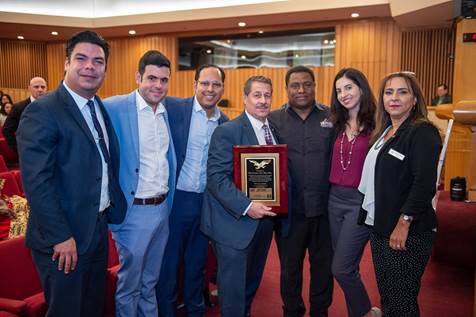 Vallalonga, president of the organization Amevex, has been a voice for human rights in Venezuela and against the dictatorship of Nicolas Maduro. Speaking in Spanish, she thanked Commissioner Diaz for his steadfast support for the Venezuelan people, calling him an “adopted son of Venezuela.”

Commissioner Diaz, whose district includes Doral, which is home to the largest concentration of Venezuelans in the United States, has sponsored numerous resolutions condemning Venezuela’s dictatorship and recognizing Juan Guaidó, the president of Venezuela’s congress, as the true president of Venezuela. He also co-prime sponsored, with Commissioner Esteban Bovo Jr., a resolution backing Guaidó’s plans for a Feb. 23 push to bring in humanitarian aid that Maduro’s government has blocked from crossing the Colombian border into Venezuela.

“I’m proud and honored to stand with the people of Venezuela in their struggle for human rights,” Commissioner Diaz said. “Venezuela is at an important turning point in its history, and hopefully this is the moment when it will be freed from the grip of violence and oppression and take the path of freedom and democracy that the people have been yearning for.”