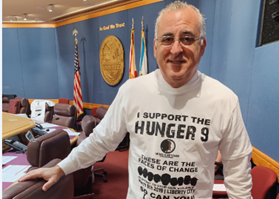 MIAMI-DADE – On March 19, 2019, Commissioner Esteban L. Bovo Jr. showed his continued support of the Operation Hunger Strike by wearing a shirt of the nine Circle of Brotherhood members, also known as the Hunger 9, at today’s County Commission meeting.

“It has been 11 days since Anthony Blackman, McArthur Richard, Albert Campbell, Phillip Muhammad Tavernier, Melvin El, Ed Haynes, Anthony Durden, George Jackson, and Leroy Jones have been fasting to end the gun violence that plagues our communities,” Commissioner Bovo said. “Each one of these men has either lost a loved one or know someone who has perished from gunfire. I wear their shirt today to stand in solidarity with the Hunger 9 who are risking their lives to demand action on gun violence and bring awareness throughout Miami-Dade County.”