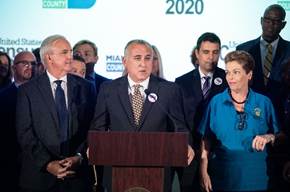 With its first meeting, the committee officially kicked off of the 2020 Census effort. The meeting included a briefing by the U.S. Census Bureau and a livestream of the national launch of the U.S. Census Bureau kickoff to mark the one-year-out milestone from the 2020 Census, calling for efforts on the local, state, and federal levels. Most importantly, every member of the community will play a role in making Miami-Dade County count.

“We have one opportunity every 10 years to count our population.” Commissioner Bovo said. “The census gives us an opportunity to be part of the democratic process. Census numbers ensure our representative districts – for the U.S. Congress and for the state legislature, and in our local governments. Being counted lets our government know that we intend to be represented in the decisions that they make. The roads we drive on, the hospitals we go to, the schools our children attend – all these things have been influenced by the census. As Chair of the 2020 Census Task Force, I am committed to working together to develop solutions to effectively reach everyone and encourage them to respond to the 2020 Census. An accurate count helps the federal government allocate more than $675 billion in federal funds annually for infrastructure, programs and services.”