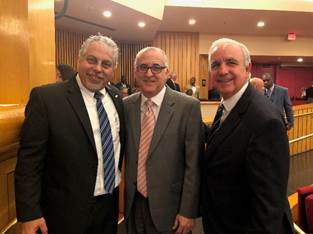 MIAMI – On May 7, 2019, the Miami-Dade County Commission approved Commissioner Esteban L. Bovo Jr.’s resolution recognizing Jerusalem as the historical homeland and rightful capital of the democratic Jewish State of Israel. Founded in 1948 to provide a refuge for the Jewish people, the State of Israel designated Jerusalem as its capital shortly thereafter its independence. In December 2017, President Trump formally announced that Jerusalem would be recognized as the capital of Israel and ordered the United States Department of State to prepare to relocate the Embassy to Jerusalem.

“This Board has a long history of standing with the State of Israel, supporting the strengthening of the alliance between the United States and Israel, promoting shared values of both countries, and combating discriminatory policies aimed at the Jewish state,” Commissioner Bovo said. “I thank my colleagues for approving my resolution recognizing Jerusalem as a true capital of Israel. Just recently, over 600 rockets have been fired from Gaza attempting to kill Israelis. With anti-Semitism on the rise and constant attack toward Israel, this Board wishes to continue showing its unwavering support for the democratic Jewish State of Israel through the symbolic recognition of Jerusalem as its eternal capital.”