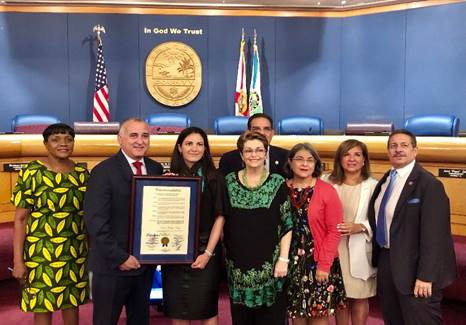 MIAMI–DADE – At the Miami-Dade County Commission on June 18, 2019, Commissioner Esteban Bovo presented a commendation to Rosa María Payá, leading pro-democracy activist and the daughter of the late dissident Oswaldo Payá.

Rosa María Payá was recently awarded the UN Watch’s highest human rights distinction, the 2019 Morris Abram Human Rights Award, at its Annual Gala Dinner on June 13th in Geneva. As an advocate for Cuban democracy, both through local efforts in Cuba and international initiatives, Ms. Payá is the leader of Cuba Decide, a non-partisan group that wants a binding national referendum that will call for holding a free democratic election in Cuba.

“A champion of freedom, democracy, and universal human rights, Rosa María Payá is a voice for the freedom-seeking people of Cuba who are oppressed daily under the Castro and Diaz-Canel regime,” Commissioner Bovo said. “Miami-Dade County is proud to honor individuals like Rosa whose diligence, achievements and dedication contribute greatly to the well-being and enhancement of our exile community. Today, Rosa carries on the work of her late father, Oswaldo Payá, as she tirelessly fights for a free and democratic Cuba.”

“The support of the international community is essential to achieve democracy and liberation for my country,” Rosa María Payá said. “This recognition gives us hope that the change is closer every day.”