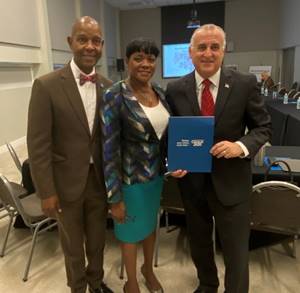 MIAMI-DADE – On March 5, 2020, Commissioner Esteban “Steve” Bovo and Chairwoman Audrey M. Edmonson held a 2020 Census roundtable with religious leaders in Miami-Dade County. They all discussed ways to promote the census in their communities of faith. Census forms will be mailed in March and the official count begins on April 1, 2020.

“Religious and interfaith leaders are the county’s most trusted voices,” Commissioner Bovo said. “The purpose of the discussion was to encourage everyone from all walks of life and faith that this is their census and that an accurate count will provide them with critical public services. I understand that there are folks who distrust government institutions. The idea that government demands a head count of a population, especially one that is so diverse, sparks a fear that is very real in Miami-Dade. That is why we have had conversations with community leaders from every corner of our county to help rid them of that fear. It is critical that we continue the conversation so that, together, we all will ensure that Miami-Dade Counts.”

“Churches can play a critical role in spreading the word to their congregations about the importance of the census and being counted, and that’s why we’re reaching out to faith communities as part of this effort. When people hear it from their pastors, they know it’s important,” said Chairwoman Audrey M. Edmonson.