PortMiami and U.S. Customs and Border Protection partner in "Section 560" for reimbursable services 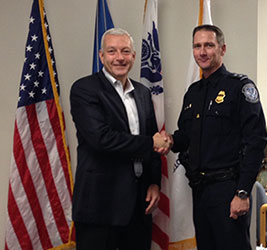 (MIAMI, December 20, 2013) – PortMiami was chosen to participate in the Consolidated and Further Continuing Appropriations Act, 2013 (Public Law 113-6) passed by Congress and signed by President Obama, and the Commissioner of U.S. Customs and Border Protection (CBP).

All costs incurred by CBP involving the provision of customs and immigration inspection-related services are reimbursable under Section 560. Those costs may include salaries, benefits, facility upgrades and equipment, transportation, relocation expenses and overtime expenses incurred as a result of the services requested

“PortMiami’s partnership with CBP is critical for our stakeholder’s growth in trade and tourism,” said Port Director Designee Juan M. Kuryla. “This agreement is to allow PortMiami to generate an alternative funding source to reimburse CBP for services in order to promote the United States economy and border security.”

Payments received by CBP shall be used to reimburse CBP for the requested services, which may include: primary processing, baggage control, inspections and radiation portal monitor staffing.

About PortMiami
PortMiami is among America's busiest ports and recognized across the globe with the dual distinction of being the Cruise Capital of the World and the Cargo Gateway of the Americas. PortMiami contributes more than $27 billion annually to the South Florida economy and helps provide direct and indirect employment for more than 207,000. For more information please visit www.miamidade.gov/portmiami.