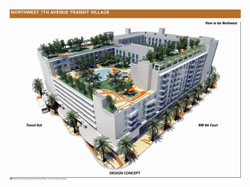 Miami-Dade Transit’s 7th Avenue Transit Village is a mixed-use development project located in the heart of Liberty City, one of Miami-Dade’s oldest and most celebrated communities.

This multi-modal hub will provide economic growth and community redevelopment opportunities for in District 3. Miami-Dade Transit’s 7th Avenue Transit Village, located on the southeast corner of 7th Avenue and 62nd Street, will to ultimately enhance current transportation services, revitalize the area and provide immediate access to I-95. The project includes a multi-level parking garage and a transit hub, which is now being served by four MDT bus routes - NW 7th Avenue MAX (277), Liberty City Connection (46), 62, and 77.

The entire project, which is being constructed by Atlantic Pacific communities on property owned by Miami-Dade Transit, consists of two phases. Phase I of the project was completed in the fall of 2015, while phase II is scheduled to start in the spring of 2016. To date, 76 units of affordable housing have been completed, under phase I, and 100 units are expected to be completed under phase II.

With a price tag of about $34 million, the 7th Avenue Transit Village will include many of the existing area for businesses/commercial, in addition to the construction of a black box theatre for the community.