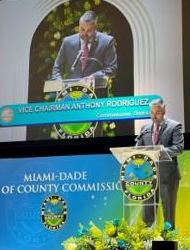 MIAMI-DADE – Miami-Dade County Commissioner Anthony Rodriguez, who represents District 10, today was ceremonially sworn in, alongside other new members of the County commission, at the Adrienne Arsht Center Knight Concert Hall.

During his swearing-in speech at the ceremony, Commissioner Rodriguez cited his passion and calling for giving back to his community – something that he has felt from a young age.

“From a young age, I watched as other community leaders selflessly gave of their time and gave back to the place we call home,” said Commissioner Rodriguez. “I wanted to not only follow in their footsteps but blaze a trail of my own – unique to our changing state and region. As I got older, graduated from Sunset High, married my high school sweetheart, Licette, and we started raising our three children – Adrian, Tony, and Angelize – I knew that I had more to give and began to weave public service into my daily life.”

Looking ahead at what he hopes to accomplish and building off his success during his tenure in the Florida Legislature, Commissioner Rodriguez stated that the quality of life for residents and small businesses are priorities of his for his four-year term. He also listed “creating and incentivizing affordable and workforce housing” as being at the top of the list as well, with the goal of finding “ways to make housing attainable so our workforce can continue to grow and thrive.”

“So, today, as we all begin a new day in Miami-Dade County and focus on a better future together, I promise my constituents that I will listen to their ideas and concerns,” said Commissioner Rodriguez in closing. “I will lead and serve with integrity, honesty, and decisiveness, and I will always be guided by God’s will. And I extend my hand in partnership to my fellow commission members and elected leaders at all levels of government – from our local communities to our great nation – so that we can work together for those who have elected us to serve.”