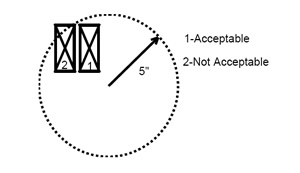 A specimen will fail if the small missile goes through.

When the small missile test is required

When prior to impact the specimen has an opening that a 3/16" sphere can pass, and this opening is perpendicular to the trajectory of the missiles being shot. Also, it is required for products to be installed above 30 feet in elevation and are not to require any protection device.

All 10 small missiles must be fired at once at the required speed for which only the speed of one has to be measured.

After the large missile test

The small missile test is performed on the same specimen as used in the large missile test.