There are two types of freshwater wetlands: marshes and swamps. Marshes are ecosystems dominated by herbaceous plants rooted in shallow water that remains at or above ground level for most of the year. Swamps are wetland forests. These freshwater wetlands are a major element of the South Florida landscape, even though they have been reduced to half of their original extent.

Freshwater marshes make up about one-third of the wetlands. The largest of these wetlands being the Everglades, which like all marshes, consist mostly of herbaceous plants and grasses. Florida’s marshes are characterized by their subtropical location, varying water levels and recurring fires.

The fluctuation in surface water levels between the wet and dry season play an important role in the existence of a marsh. Water levels are at their highest in the summer and gradually begin to recede as winter approaches. In southern Florida, standing water is not present within a marsh by mid dry season. In northern Florida, water levels can remain high throughout the season due to increased winter rainfall.

In general, Florida marshes have a hydroperiod of seven to 12 months. Many of the species that inhabit a marsh have evolved to require this water fluctuation for their survival. Although much of the flora found in a marsh is tropical, the dominant species are of temperate origin. Most Florida marshes are dominated by only a few species, but the variety can be quite large.

Fire is very significant to the marsh ecosystem by preventing the invasion of woody plant life. Without fire, the invasion of species such as wax myrtle (Myrica cerifera), willow (Salix caroliniana), and buttonbush (Cephalanthus occidentalis) would occur rapidly causing the transition to a swamp.

Summer is the natural fire season due to the high occurrence of lightning, so fires usually occur when the moisture content of the soil is high and plants are growing. Because organic soils do not catch fire when the moisture level is above 65 percent, the fires are restricted to above water plant life, and the deeper marshes act as a natural barrier to fire.

The fire burns the dead plant material, releasing nutrients back into the soil. Most common marsh plants, such as saw grass (Cladium jamaicense), pickerelweed (Pontederia cordata), arrowhead (Sagittaria lancifolia), and spikerush (Eleocharis spp) depend on fire and replenish themselves quickly after an occurrence.

The saw grass has particularly become adapted to fire, with its bud buried in soil and surrounding leaves protecting it from the flame. The saw grass leaves are extremely flammable and can reach a height of 20-40cm after fire. However, if water levels completely submerge the saw grass, the stem will die.

Most of the aquatic life found in Florida’s marshes are of temperate North American origin and the birds are of both temperate and tropical origin. The American alligator (Alligator mississippiensis) plays a crucial role in the Florida marsh because of the “gator holes” it creates. These ponds provide a habitat for aquatic life during the dry season and acts as a sanctuary until the water levels rise. The concentration of organisms in the dry season makes hunting effortless for the birds.

Because marshland is very important to the Florida landscape, the Everglades Restoration Project has been developed with the efforts of The Florida Department of Environmental Protection and the South Florida Water Management District.  The plan was approved to restore the original “river of grass.” It will capture water that would otherwise make its way to the ocean and direct it back into the marshland.

This is the nation's largest such project, costing $7.8 billion and about 20 years to develop. The plan will restore vital ecological features of the marsh, allowing for a growth in the numbers of species inhabiting the ecosystem. Of the endangered species, the wood stork, snail kite and American crocodile will benefit and increase.

More natural patterns of pre-drainage water flows will be restored, and the water supply will increase, benefiting urban and agricultural users. Flood protection will also be maintained and even improved, one thing that is vital to South Florida.

What are wetlands and where do wetlands exist? The Wetlands Brochure (6.8 MB - English & Spanish) will answer a lot of your questions about wetlands in South Florida and any relevant permitting processes.

files, you can download Acrobat Reader  for free from Adobe Systems, Inc. In order to use PDF files, you must have Acrobat installed on your computer.
Back to Top Page Last Edited: Mon Nov 4, 2013 3:47:20 PM
environment 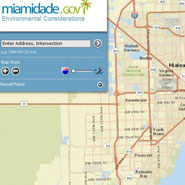 Search the Environmental Considerations GIS Map to find out if a property may have any environmental features associated with it.