The Miami-Dade County Artificial Reef Program was established in 1981 and is currently managed by Environmental Resources Management's Restoration and Enhancement Section. Documented artificial reed construction in Miami's coastal waters, however, predates the Miami-Dade County program by more than five decades.

Artificial reef construction in Miami-Dade County has a documented history of more than 80 years, beginning in 1920 when an abandoned ship on the Miami River was sunk off the coast to create a new fishing area.

This motivation for constructing artificial reefs continued into the 1940's through the efforts of charter boat  captains on Miami Beach. Pflueger Marine Taxidermy made a significant contribution, acquiring and sinking 15 large vessels from the 1969 to 1980.

The Miami Sportfishing Club became involved in artificial reef construction with the sinking of four large vessels south of Fowey Rocks during the 1970's and early 80's. During the 1980's the former Dade Sport Fishing Council, R.J. Diving Ventures and Fish and Game of Homestead worked to acquire and deploy 12 large vessels and other artificial reef materials.

During this period, Miami-Dade County developed permit applications or assisted other applicants to establish offshore and inshore artificial reef sites, which span the length of Miami-Dade's 35 nautical mile coast.

The ability of artificial reefs to attract and support diverse assemblages of marine life also made them vulnerable to the potentially adverse effects of unrestrained fishing pressure. For this reason, in 1985, Miami-Dade County solicited the South Atlantic Fishery Management Council to establish the Key Biscayne Artificial Reef Site as a Special Management Zone (SMZ) to restrict certain types of fishing gear thereby limiting the potential impacts of unrestrained fishing pressure, while maintaining most recreational uses of the site."

In 1990, federal agencies approved the SMZ prohibiting fish traps, bottom long lines, and spear guns of any type including slings and pole spears.

As a result of these combined efforts, the Miami-Dade County program is regarded as the largest (in terms of  materials deployed) program of its kind in Florida, which leads the nation in number of established artificial reef sites.

Over the years, the Artificial Reef Program has grown in its scope, and broadened it's focus. Presently the program seeks to provide enhancement in three areas:

In fact, in large part due to the artificial reef program, Miami-Dade has been known as a premier wreck-diving destination. Additionally over the past 10 years, the program has placed over 20 acres of carbonated-based materials, targeting development of benthic organisms and fish, which has resulted in the enhancement of nearly 90 acres of marine habitat. 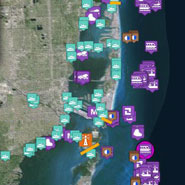 The Reef and Buoy Finder GIS page includes information on artificial reefs and offshore mooring buoys managed by Miami-Dade County, including their coordinates and much more.