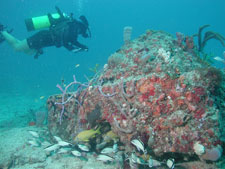 In 1988, the Army Corps of Engineers and Environmental Resources Management restored a 2.5-mile segment of Sunny Isles Beach. An offshore borrow area located between the second and third reef tracks was utilized as a source of sand. During construction, the dredging contractor went outside of the permitted borrow area, damaging the adjacent hard bottom by reducing the physical relief and complexity of the reef.

Miami-Dade County established an advisory committee of artificial and natural reef experts, marine resource analysts, and resource managers to develop criteria for and selection of the artificial reef units to be used in the mitigation. After issuance of a "Request for proposals," the advisory committee reviewed the designs and selected three module designs described below.

The Sunny Isles Reef Restoration (SIRR) project consisted of 50 Dome Modules (D), 20 Reef Replacement Modules (R), and 10 CSA2 Module Designs (M). The D modules were basically hemispheres constructed to mimic a large coral head. The R modules were constructed of natural limestone rock cemented into a rectangular structure. The M modules were constructed from pre-cast concrete with higher relief than the R modules. These modules were deployed in August of 1991 and placed in the impacted area on the eastern edge of the "second reef" at a depth of approximately 60 feet.

This site was monitored by G.M. Selby and Associates for the initial four years post deployment from 1991 to 1995 documenting the colonization and development of benthic and fish assemblages. In 2002, Environmental Resources Management received a matching funds grant from the Florida Fish and Wildlife Commission (FWC) to conduct a follow-up study to document the assemblages utilizing the artificial reef modules 12 years after deployment. 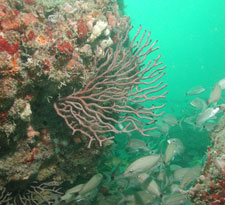 This baseline study demonstrated that all five boulder reefs provide habitat that has supported abundant and diverse biological assemblages. The benthic assemblages were dominated by turf algae coverage followed by sponge (Porifera) species and to a lesser extent soft coral (Octocorallia) and stony coral (Scleractinia) species. The fish assemblages on the boulder reefs were often composed of large schools of grunts (Haemulidae) and gobies (Gobiidae). Other common reef fish families were also observed including snappers (Lutjanidae), wrasses (Labridae), damselfish (Pomacentridae), and parrot fish (Scaridae). This study has provided baseline information for evaluating the effectiveness of these reefs in meeting the objectives for which they were constructed such as fisheries enhancement or habitat mitigation and will assist in future artificial reef planning. 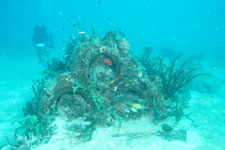 In addition to the Sunny Isles Reef Restoration Onsite Project, an offsite project was also established to mitigate for the damage done to reefs during the 1988 beach renourishment project. The Sunny Isles Offsite Mitigation Project involved the placement of a loosely aggregated, single-layered limerock boulder piles and prefabricated concrete and limerock modules in 1993. The reef area is located offshore of Miami-Dade County in 60-65 ft of water in the Sunny Isles Artificial Reef Site. Monitoring has not been conducted at this site to date. Environmental Resources Management received a matching-funds grant from the FWC to begin a monitoring project to document the benthic and fish assemblages on this artificial reef.

The objectives of the monitoring are to collect appropriate data to allow description and comparison of community characteristics, such as abundance and diversity, of the benthic and fish using descriptive and non-parametric statistics.  The data collected will provide comparisons of the communities of benthic and fish assemblages utilizing a scattered arrangement of a single-layer limerock boulder and the module reef (opposed to a multi-layer boulder reef with equally spaced modules). This data currently does not exist and is necessary for future monitoring efforts. The goal is for this project to serve as a baseline or starting point for future research involving single-layer boulder reefs as well as a base for comparison to the data collected on a variety of multi-layer limerock boulder reefs in 2006. Monitoring surveys will begin in December 2007.

In 2009, the FWC awarded Environmental Resources Management grant funds to conduct a study to examine: 1) Influence of proximity of artificial reef modules (ARMs) on fish assemblages; and 2) Depth of ARMs on both fish and benthic assemblages.

The modules evaluated in this study are located in the Port of Miami Artificial Reef Site A (POM A) and Sunny Isles Artificial Reef Site (specifically the Bal Harbour Mitigation Site [BHM]). The POM A modules were deployed in July and August 1996 and the BHM modules were deployed in May 1999. This study demonstrated that varying spatial arrays (less than 10' centers, 25' centers, 50' centers and 100' centers) and depths (25' and 68') of modules provide habitat that has supported abundant and diverse biological assemblages.

The benthic assemblages on all spatial arrays at POM A and BHM were dominated by turf algae followed by sponge (Porifera) species and to a much lesser extent soft corals (Octocorallia) and stony corals (Scleractinia).  The BHM modules had slightly more soft corals while POM A modules had more stony corals, mostly of the species Oculina diffusa. The fish assemblages on all POM A spatial arrays were dominated by the family Haemulidae (Grunts) and Labridae (Wrasse) most commonly of the species Thalassoma bifasciatum (blueheaded wrasse).  The family Gobiidae (Gobies) was most abundant on the BHM modules, with Coryphopterus personatus (Masked Goby) being most common.

Other common reef fish families observed include Acanthuridea (butterfly fish), Pomacentridae (damselfish), and Tertadontidea (puffer fish). This study has provided information for evaluating the effectiveness of these reefs in meeting the objectives for which they were constructed (habitat mitigation) and will assist in future artificial reef planning. 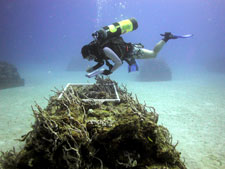 In the summer of 1990, a project to renourish the beach of the Village of Bal Harbour was conducted. The beach was renourished with sand obtained from an offshore borrow source located approximately 1.6 miles offshore of northern Miami-Dade County between two hardbottom reef tracts, locally know as the second and third reefs. Biologists from Environmental Resources Management conducted visual surveys of the hard-bottom reefs bordering the borrow area during the construction period. During a routine weekly inspection, biologists discovered severe sedimentation and mechanical impacts to the hardground reef areas bordering the borrow area. The extent and magnitude of these impacts were subsequently documented.

On December 8, 1994, the Florida Department of Environmental Protection (FDEP) and Miami-Dade County executed a consent order (OGC File No. 94-2842). The consent order detailed the scope, valuation and mitigation of the impacts, and provided a mechanism for in-kind mitigation; requiring the construction of 2938 m2 of artificial reefs. The order also required biological monitoring of both benthic and fish communities over a 20 year period to ensure and quantify success of the mitigation.

In 1995, Miami-Dade submitted a proposal for the mitigation and required monitoring. The mitigation proposal called for an artificial reef site to be constructed with a 150' x 75' area of multi-layered limerock boulders centered in a matrix of 176 concrete-limerock reef modules. Modules within the matrix were to be placed on 25-foot centers. The Bal Harbour Artificial Reef was constructed between the second and third reef tracts, offshore of Baker's Haulover Inlet.

On May 10, 1999, the placement of limerock boulders and artificial reef modules was completed. In partial fulfillment of the consent order, biological monitoring of this site began on October 6, 1999. Monitoring took place on the boulders and modules of the artificial reef site (hereafter referred to as BH Mit) and on adjacent, non-impacted reef areas. These reefs are locally known as Second Reef (west of the artificial reef site) and Third Reef (east of the site); stations on these reefs are known as BH-2R and BH-3R, respectively.

files, you can download Acrobat Reader  for free from Adobe Systems, Inc. In order to use PDF files, you must have Acrobat installed on your computer.
Back to Top Page Last Edited: Mon Aug 6, 2018 4:53:15 PM
environment
Reefs