Roberto J. Gonzalez was appointed by Gov. Ron DeSantis as the District 11 Commissioner on November 23, 2022. Before joining the Board of County Commissioners, Gonzalez - the founding partner of PereGonza The Attorneys PLLC - also served on the Republican Party of Miami-Dade’s Executive Committee as Secretary from 2016 to 2020.

In 1989, Gonzalez legally emigrated with his parents to the United States from Guatemala at the age of two. He grew up in Miami and has been a resident since 1990. On April 30, 2014, he became a citizen of the United States of America.

Gonzalez is a dedicated husband and father. He and his wife, Jessyca, have two daughters, Skye and Ava. 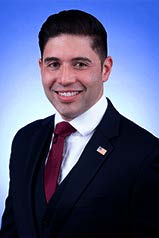