From May to July of this year, the County solicited input from the community on this strategy. Building on the community engagement models of the Thrive305 survey and Civic Week, the Office of Resilience hosted five virtual discussions with community members in collaboration with the CLEO Institute and the Miami Climate Alliance.  Spanish and Haitian Creole language interpretation were available for each of the public meetings and the meetings were recorded and shared online.

Each of the virtual meetings focused on specific topics reflecting key sections of the Draft Climate Action Strategy including, energy and buildings, transportation and land use, and waste and water management. In total, 671 interested stakeholders registered for the five meetings and 304 attended. The recordings of the meetings were sent to all who registered so people could watch at a later date if they were not able to attend.

In addition to the community meetings, the Office of Resilience developed a short survey to solicit feedback on the community’s perceived opportunities and challenges to moving to a healthy, equitable, low-carbon future. The survey was available in English, Spanish, and Haitian Creole. 493 stakeholders responded to the survey.

The community engagement and interest in this Strategy would not have been possible without the help of many local non-profit partners in the Miami-Dade Community. The CLEO Institute was a key partner in promoting the engagement and also as partners for the virtual meetings where staff from their organization opened each meeting with a Climate101 mini lesson. The Office of Resilience also worked with the following organizations to spread the word about the meetings and survey: American Institute of Architects; Catalyst Miami; Coalition for Clean Cities; Dream in Green; Family Action Network Miami; Florida Immigrant Coalition; Florida Rising; Miami Climate Alliance; Sun Florida; and We Count.

The Office of Resilience also worked with other County departments on outreach including Community Action and Human Services; Cultural Affairs; Libraries; Parks Recreation and Open Spaces; Solid Waste; Transportation Planning Organization; Transportation and Public Works; Water and Sewer; and the Office of the Mayor.

In the meetings and as part of the survey, stakeholders were asked to imagine their lives in 2030 (the year the County has set a goal of 50% greenhouse gas emissions from the 2019 levels). The general themes that were reiterated by the majority of participants were that they hoped for a future with more access to green spaces, compact development along transit corridors, bike and pedestrian friendly neighborhoods, more electric vehicles and charging stations, improved public transportation (and better coverage), flex working/tele commuting policies, and more widespread and accessible solar energy for residential and commercial buildings. 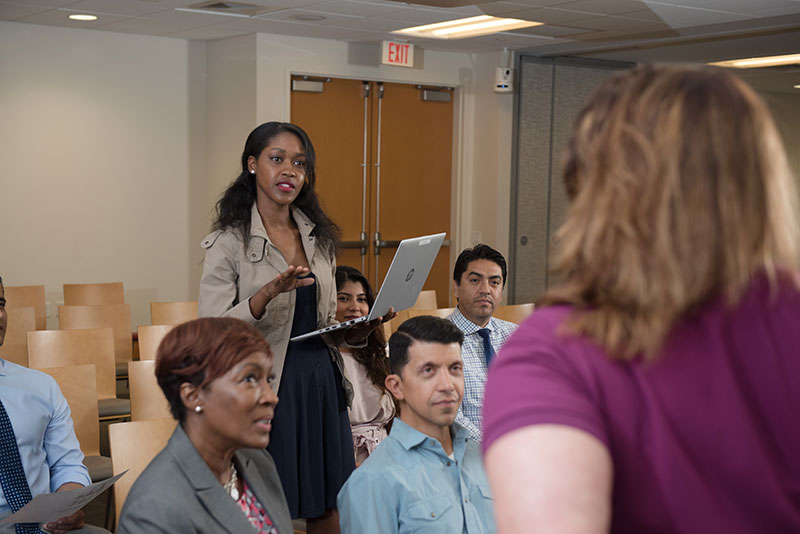 The survey also asked stakeholders to identify perceived barriers to climate action. This information is particularly helpful as the County works to implement climate mitigation measures in an equitable way across the entire County ensuring that no one is left behind and that historic inequities be addressed.

When asked what the biggest barriers to reducing water use and waste were, the majority of respondents said that lack of information was holding them back. Educational campaigns in these areas will be important moving forward.

The biggest perceived barriers to implementing both energy and water efficiency measures in homes and businesses were almost evenly distributed between lack of information, lack of leadership, and cost barriers.

These barrier questions illustrate the bottlenecks in our community to moving forward on important climate actions and should be prioritized as the County develops resilience and climate related policies. It is imperative the County ensure there is readily available, accessible, and engaging information for the community about these topics, addresses cost barriers to adopting new technologies and continues to lead by example with more bold action.

In addition to engaging the community through the virtual meetings and the survey, the Office of Resilience also engaged the business community with a focus on large emitters of greenhouse gas emissions and major employers including hospitals. We also engaged the 34 municipalities in the County through targeted briefing sessions.

The County acknowledges the impacts that historic and current structural racism and inequality have had on our community and commits to creating more just outcomes. Using Resilient305 as a framework, this strategy aims to build Miami-Dade County’s capacity to address the causes of climate change so that our actions are effective and equitable for all of our residents, today and in the future.

Miami-Dade is striving to create a more effective and equitable government by ensuring that through our Climate Action Strategy and other efforts we:

In alignment with the South Florida Regional Climate Change Compact (Compact), equity is defined as just and fair inclusion. The goals of equity are to create conditions that allow all individuals and communities to reach their full potential to the benefit of the individual and the larger regional community. An equitable community is one in which all can participate and prosper in their communities and in the economy, and where benefits and burdens are shared fairly. Equity considerations relate to race, economic status, age, and accessibility for those with disabilities, etc.

Although both the survey and the meetings were available and advertised in multiple languages through the use of newsletters, social media posts and ads, and email blasts, the attendees and respondents to the survey did not fully reflect the diversity of Miami-Dade County. Overall, those who participated in the survey tended to be wealthier and older, with black and Hispanic minorities under-represented in the poll results, compared to the average for Miami-Dade County.

Recognizing that the community outreach and engagement was not as inclusive as desired, the Office of Resilience will continue to expand outreach as the Climate Action Strategy is implemented by continuing to engage the partners mentioned above and by expanding that network. Successful community outreach will be more reflective of the diversity of the County and will build on the partnership and relationships already forged through this effort. The Office will also continue to consult with and partner with the County’s new Office of Equity and Inclusion in order to ensure maximum participation in future efforts

To advance equitable outcomes and understand progress towards these goals, review of this work will be conducted on a continuing basis and in collaboration with internal and external stakeholders to ensure Miami-Dade's solutions to climate change work for all of our residents.