Certain gases in our atmosphere - carbon dioxide, water vapor, and methane primarily - have unique characteristics that allow incoming solar radiation (light) to pass through the Earth's atmosphere, but prevent a significant amount of the outgoing infrared radiation (heat) from escaping back into space. 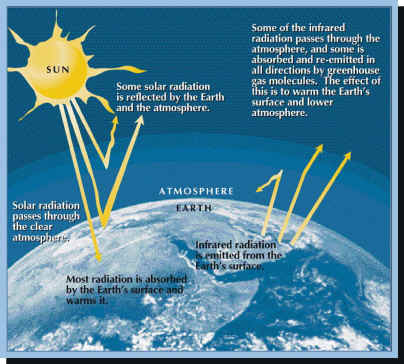 The phenomenon gets its name from the similarity to a garden greenhouse.  Visible light passes through the glass ceiling and walls of a greenhouse.  Some of the light is absorbed, some is reflected back, and a portion of it is radiated out as heat.  Glass, like carbon dioxide (CO2) and other "greenhouse gases" doesn't allow heat to escape back out.

The Greenhouse Effect is very important to life on Earth.  Without this phenomenon, the average temperature on Earth would be much lower than it is, and life on Earth (as we know it) would not exist. The presence of greenhouse gases causes Earth’s average global temperature to be approximately 60 degrees Fahrenheit and would fluctuate wildly between hot and cold without it.

The problem arises when there's too much greenhouse gas in the atmosphere.  This is the case now.  Over the last 150 years, human activities have increased CO2 concentrations by 30%!  This "extra" CO2 has led to the phenomenon commonly called "Global Warming" or more accurately "Global Climate Change."