The Honorable Keon Hardemon was raised in the Liberty City neighborhood of Miami-Dade County. He graduated with a bachelor's degree in Business Management and an MBA from Florida Agricultural and Mechanical University.

He worked at Pfizer Inc., one of the world’s largest biopharmaceutical companies, before deciding to enroll in law school at the University of Miami School of Law. After graduating from law school early, he passed the Florida Bar on his first attempt and began serving his community as an Assistant Public Defender at the Miami-Dade County Public Defender’s Office.

In the City of Miami, Commissioner Hardemon also served as the chairman of the Southeast Overtown Park West Community Redevelopment Agency. As chairman, he partnered with renowned Chef Marcus Samuelsson to establish Red Rooster Overtown, an award-winning restaurant that is the impetus establishing Overtown as a food and entertainment destination for visitors to South Florida. He also funded the Town Park housing rehabilitation program, that has allocated more than $50 million to fully renovate Overtown’s oldest multi-family affordable housing units to ensure long-term residents could benefit from the positive transformation of a historically neglected neighborhood.

Commissioner Hardemon resigned from the Miami City Commission to become elected as commissioner on the Miami-Dade Board of County Commissioners. Within his first few months of service, he sponsored legislation that secured nearly $90 million to combat the gun violence that has been burdening poorer communities in Miami-Dade County. His initiative, the Peace & Prosperity Plan, helps to employ troubled youth at nearly $15 an hour and incentivize them to become productive residents of Miami-Dade County.

Commissioner Hardemon also serves as chairman of Miami-Dade County’s Aviation and Economic Development Committee, chairman of the Tourist Development Council, member of the Florida Bar Association, and as a member of many other prestigious professional and social organizations.

Currently, Commissioner Hardemon manages his own law firm at The Law Offices of Keon Hardemon, P.A. where he maintains a criminal defense and civil practice. He has represented hundreds of clients, including juvenile student athletes who are on the precipice of collegiate success, and celebrities accused of serious felonies. He accepts state and federal cases. 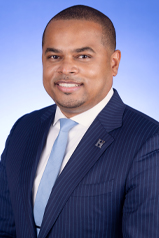